Written by Anastasia Sfika
Updated over a week ago

There are three specific cognitive aptitudes (or skills) that are highly correlated with cognitive ability: logical reasoning, verbal reasoning and numerical reasoning. In the last decade an additional skill, attention to detail, has been shown to have a high correlation with job performance and has been used to select strong candidates for hire.

Cognitive ability tests in the selection process typically use questions or problems in order to assess an individual’s ability of verbal, logical and numerical reasoning, as well as other important skills that are fundamental to success in several different occupations. There are several advantages of using cognitive ability tests, such as their advanced ability to predict job performance, their ability to produce valid inferences for numerous organizational outcomes, and the fact that they are cost-effective and bias-free assessment methods. Cognitive ability tests can be used for hiring, performance appraisal, career development and talent management. One of their biggest advantages is that they can be checked for reliability, validity, and they are objective.

The Bryq Assessment uses a series of questions to determine the cognitive ability of individuals in the four cognitive skills: Attention to Detail, Logical Reasoning, Numerical Reasoning and Verbal Reasoning. By adjusting the weight of each of the skills, it is possible to predict future performance within a given role. Many individuals are strongest in two of the four skills, therefore it’s important to consider the profile of the skills and scores as opposed to simply considering the total cognitive score. 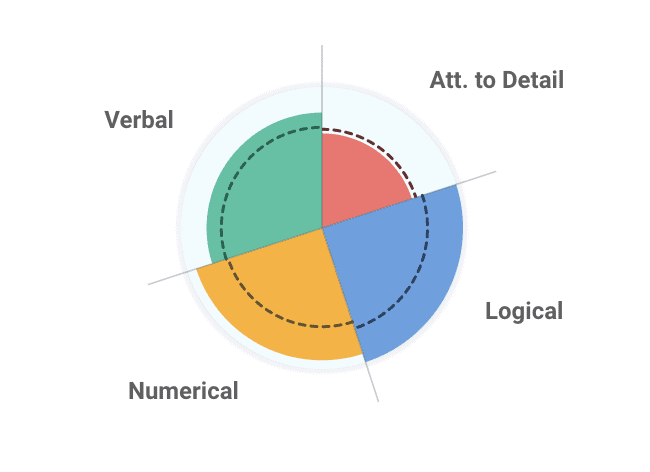 Below, you can find the key cognitive ability skills that we measure in Bryq.

Did this answer your question?